The Bears of Katmai

It is very easy to go online and learn anything and everything you could ever want to know about bears, Alaska....anything!

Click here to view the full gallery. Please leave a comment on you favorite shots so I know what to print and frame.

This trip was preceded by another trip to St. Paul Island (a small island in the middle of the Bering Sea) which should be a blog post all by itself (and it might be).

On St. Paul Island I photographed Puffins, Auklets, wildflowers, Blue Foxes etc. There were species such as the Red Legged Kittiwake that breeds in only 5 or 6 places in the entire world (all in the Bering sea) that I was fortunate enough to photograph.  There was also a murder! A very tragic event, especially in this small tight-knit community. All of this on an island with less than 500 inhabitants! See, this trip deserves its' own blog post.

But I digress. Back to the Katmai trip. We landed in Anchorage and drove five hours to Homer with a stop on the way to photograph Dall Sheep and their acrobatics on the sheer cliffs. 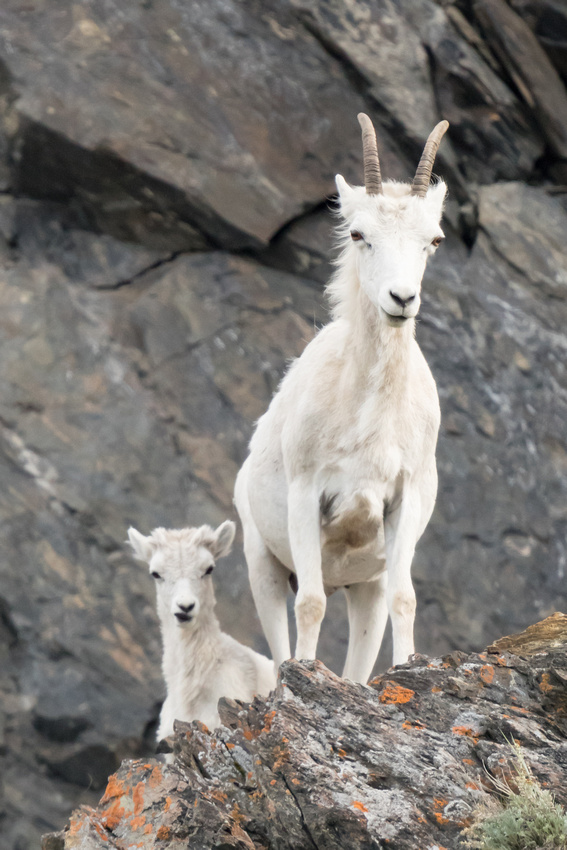 Our small group took a float plane to Kukak Bay in Katmai N.P. It was a beautiful flight over mountains and glaciers on a partly cloudy morning at a balmy 65 degrees with a pleasant landing and float up to our home base for the week. It was an old fishing boat with a small kitchen/dining area and bunk beds for the six of us. 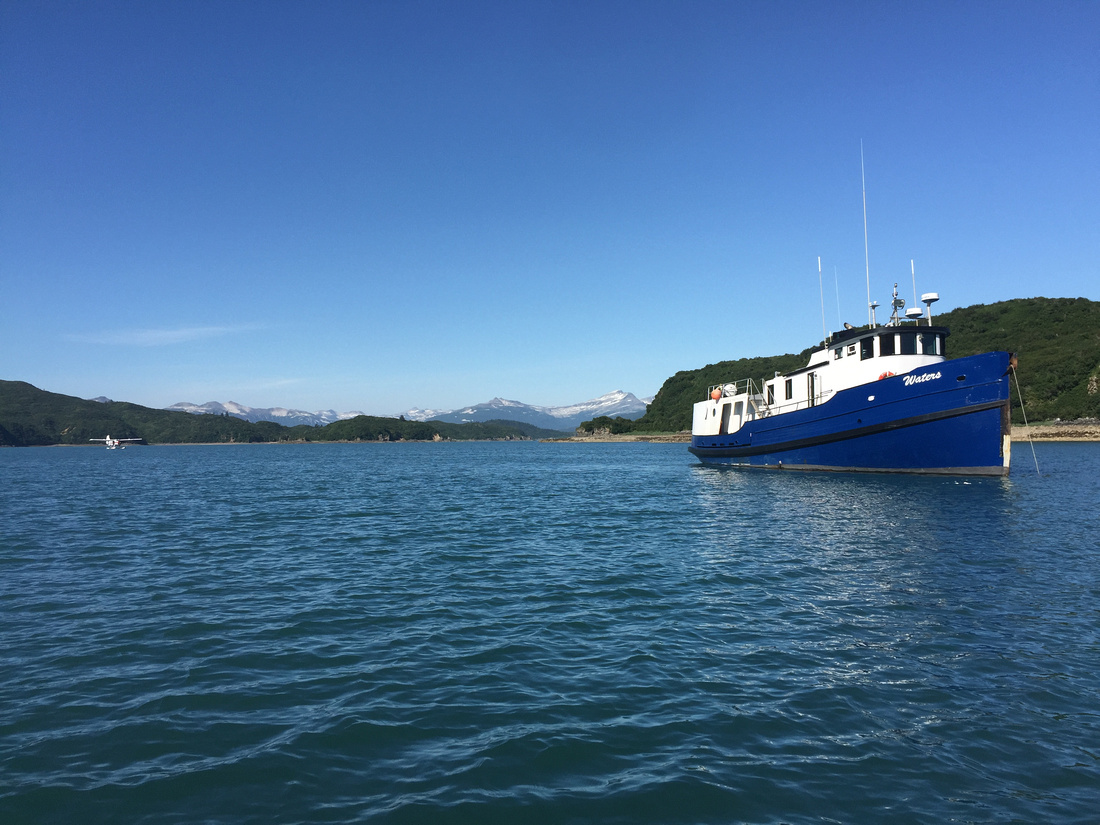 We had such an amazing crew: Joanna, our adorable red-headed cook from Cape Breton Island, Nova Scotia (she also happened to be a kick boxer), her husband Wes was the skipper of the skiff (a shallow, flat bottomed boat) that would take us ashore. Wes would eventually tell us the horrendous story of the horrible chainsaw accident that disfigured him at nineteen and the painstaking years of surgery that resurrected his rugged good looks. Erik, our Viking bear biologist, who was meant to be eaten first had we gotten into any trouble. Our Captain, John, was a shy fellow with not too much to say...but great stories when he did open up. One of which includes his interactions and subsequent observations about Timothy Treadwell, the quirky bear enthusiast who met his doom in 2003 in the Grizzly Maze of Kaflia bay, one of the bays we explored on this very trip. 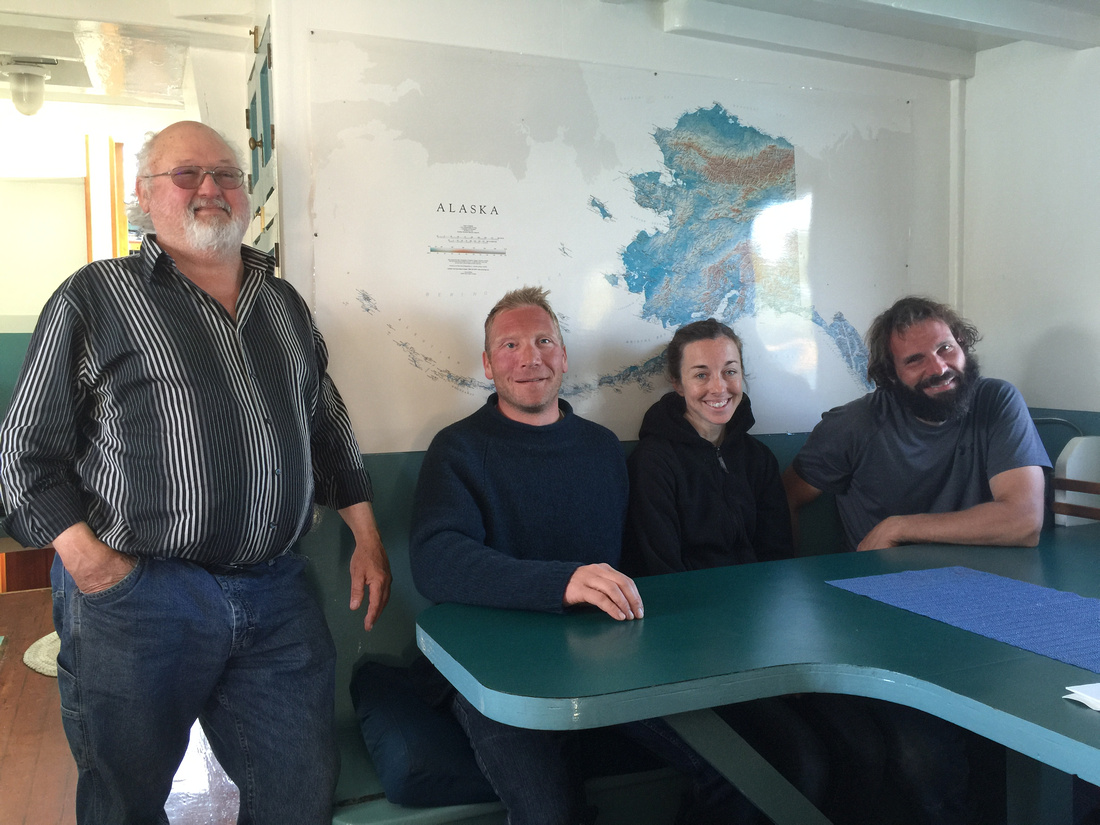 Our days were like three mini-sessions. Mornings always started with a hearty breakfast and a warm smile from Joanna. Wes would excuse himself and get the skiff ready while we grabbed camera gear and put on our hip waders. Our fearless leader, Chris, was nursing an ankle fracture. He left his prescribed walking boot at home so he could don his hiking boots and/or hip waders. Despite the pain he never missed a session and was fit enough to stay in the lead for most of the trip! We would photograph in the morning until the light got too harsh, then we would head in for lunch. You start to realize pretty quickly how dangerous boating in Alaska is when a seasoned veteran shows concern and a large dose of healthy respect each and every time we would board or disembark the skiff. The tides move so quickly through the bays, moving debris, logs and sand bars that the bathymetry (topography under the water) is never the same from one tide to the next. Wes would search for clues in the ripples of the surface of the ocean to assess the safety of a shore approach. On several occasions he would have to turn around and search elsewhere. The same held true when it came time to pick us up. There were occasions when we would have to traverse inlets with our camera gear on our shoulders to get to the safest pickup point. 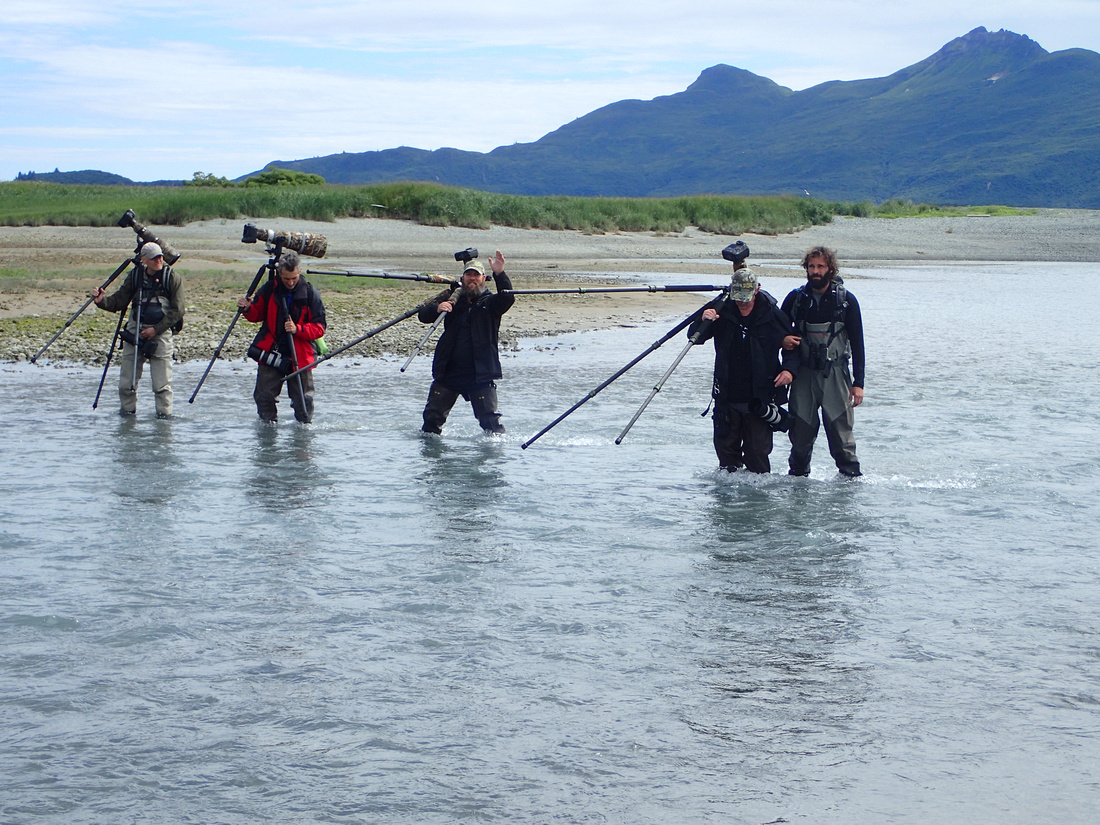 Trudging through an inlet with our gear. A recipe for disaster, luckily none of us fell.

At this point we would pass our gear onto the skiff and climb aboard. The breeze from our speed on the skiff would serve as our fly abatement program and offered a nice break from the goliath Alaskan flies. By the time we reached the main boat the inconvenience was nothing but a memory. Time to pass the camera gear up to the big boat, take off the waders and wash up for lunch. Another warm smile and lots of amazing food. Joanna always had fresh fruit for us, and would whip up some secret 'sauce' to put on it. After lunch we would grab our gear and head back to shore to photograph the bears and hope for a wolf sighting. The wolf population, where we were concentrating our efforts, was not doing well we were told. We did, however, have a couple of sightings. One afternoon we heard some howling so we decided to see if we could get close enough to photograph the wolves. We took our time and stayed low. Amazingly enough a wolf broke cover from the tree line and to our awe she had several pups in tow! On another occasion we were busy photographing bears when a wolf squared his shoulders to us from a few hundred yards away! 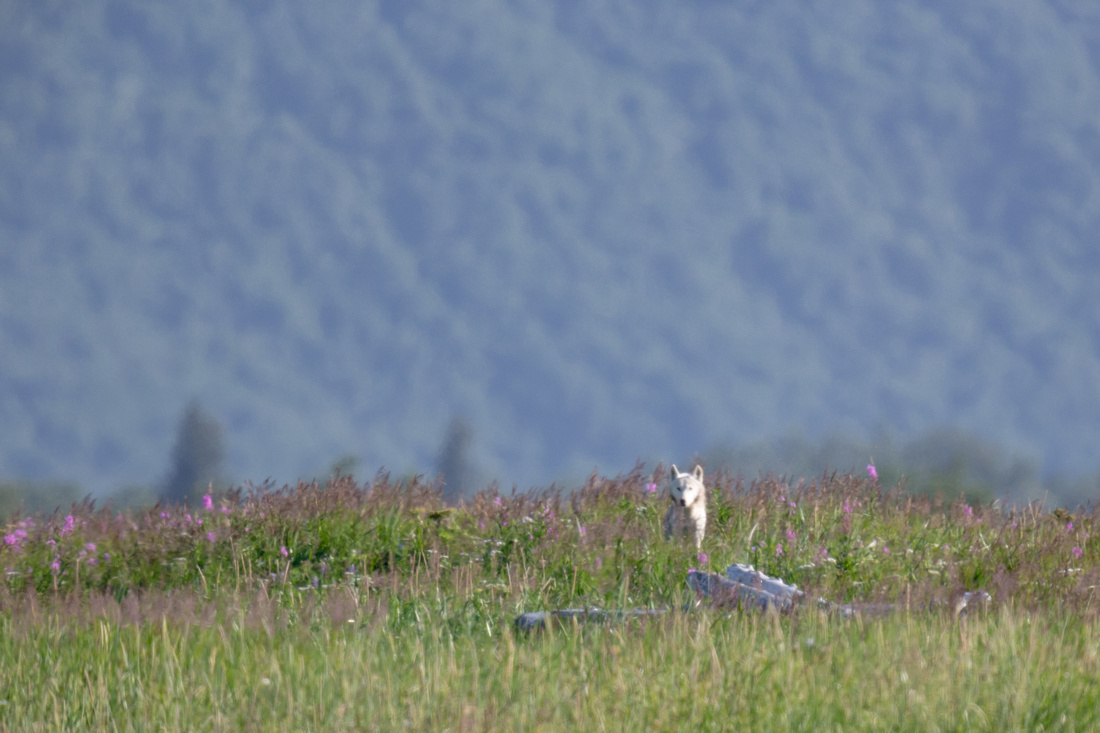 We would come in for supper and guess what. We'd go back out again. Since the sun didn't set until almost midnight we would have plenty of time to shoot the nice soft late afternoon light (at 10:30pm) and then after a few games of cribbage with my new friend (who is also named Mike), I would retire to bed...undefeated! Sorry Mike, I know you were rusty.

Three sessions a day over five and a half days left me a little disoriented as to what transpired when?! Let me wrangle some details, the specific day and time is irrelevant since we are not in a court of law.

One day, let's call it a Wednesday (since my camera metadata tells me it was July 13th, 2016), we were in Kukak Bay  spending some time on Eagles. Our guide had located a nest that was active and accessible! Accessible via a steep hike through dense bear country!! We relished the sweet flavor of  Salmon Berries, both red and white, as we ascended. At the top was five foot by two foot area that two, maybe three people could squeeze into as long as one didn't hold a large life insurance policy on the other. Thirty feet to the northwest at eye level was a spectacular Bald Eagle nest with a large juvenile waiting for some fish. I could see the shot! Given the wind direction and our presence the adult delivering the meal would approach the nest facing me with wings wide open. At eye level! It is so engrossing when you can photograph a wild animal at eye level. There is an intimacy, a sense of belonging, a connectedness when you are at the same physical plane as an eagle! You can see it on 'Eagle Cams', you can see it on television or the internet. I assure you there is no substitute for getting out into nature and going through the trials and tribulations of the planes, boats, turbulence, rough seas, sweaty hikes, nuisance insects, anticipatory mauling and then finally seeing something as spectacular as an Bald Eagle at eye level while the taste of Salmon Berries is still fresh in your mouth. Knowing that if a 900 hundred pound Coastal Brown Bear came crashing through the brush and your only escape is a 200 foot drop off a cliff is very sobering and then you realize that a 200 pound cub would put you in the same coffin! 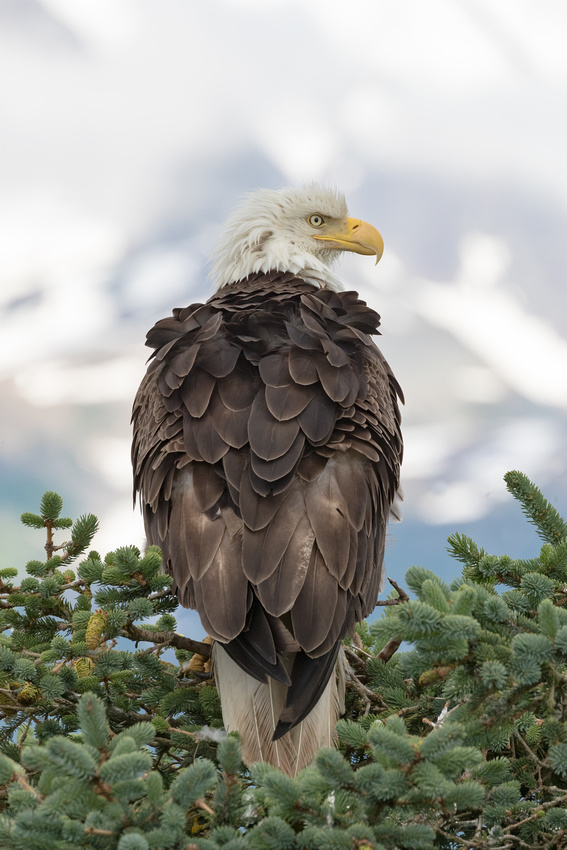 Bald Eagle with mountains in the background 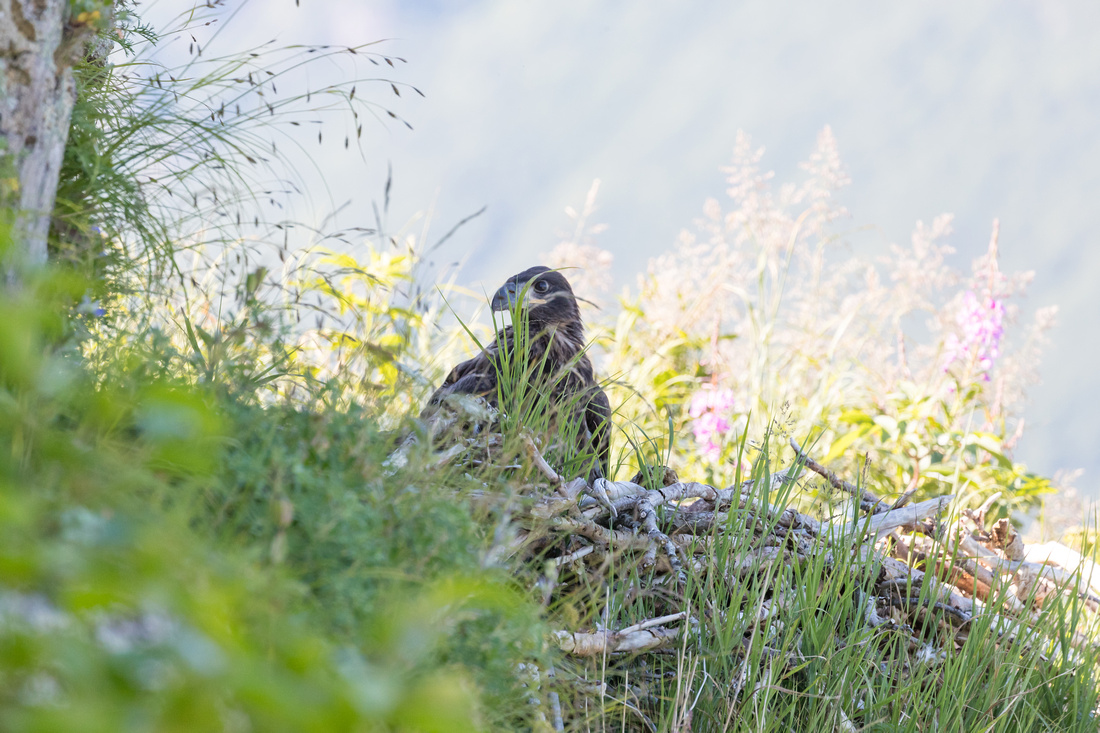 Juvenile bald eagle in the nest

On Friday July 15th I was photographing a Mom and her two cubs (probably 2-3 years old). They all dropped down into a channel with some retreating tide still present. I watched and photographed as they clammed and frolicked. The mom was teaching them how to spar, how to handle themselves in real world situations. At times it seemed rough, excessive from a human perspective. I moved in unison with the bears staying ahead at the proper light angle 4 feet above them and many yards ahead...until they caught up quickly and rushed by me. They were not more than 5 feet outside my reach. This was not intentional or desired. With my gear, the obligatory 100 yards is plenty close. I felt no threat, no rush of adrenaline, no sense of fear. At that moment I could see how someone like Timothy Treadwell could possibly persuade himself into a lull of safety. That is until I continued to witness the ferocity in the playfulness of the cubs, at which point I remembered why I'm so drawn to nature. It's not because I need to become one with these wild creatures. I don't want or need to understand them in a way that I can communicate  with them. My connection with wildlife is simply my fascination with them. The beauty, the differences they possess, the contrasts between us and them. Capturing the beauty of bears, wolves, pigeons...any wildlife in their element caught up in their natural behavior causes an elation, a euphoria for me that is unparalleled. 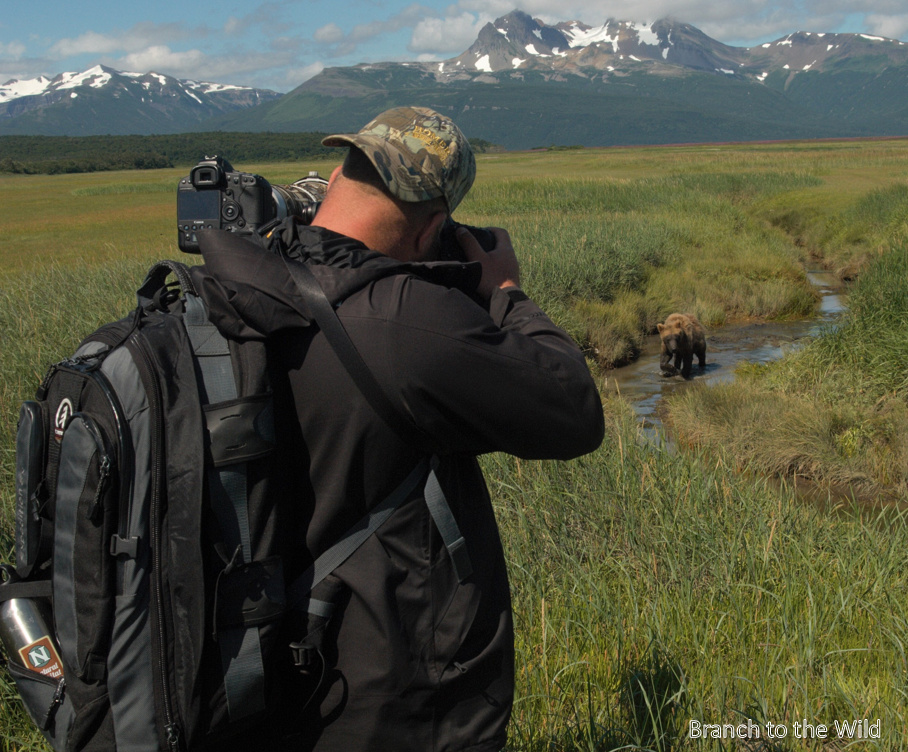 The plan for this portion of my trip was to photograph bears in a variety of behaviors. Bears eating grasses and berries, sparring and eventually chasing salmon. Although we saw salmon jumping in the bay, they never made it upstream while we were there. Looking back on this adventure I know without a doubt, Alaska is a place I will go back to. The ruggedness, the wildness, the unforgiving climate, the mesmerizing landscape. It draws me in. I will bring my girls and we will explore. We will submit to the last frontier. 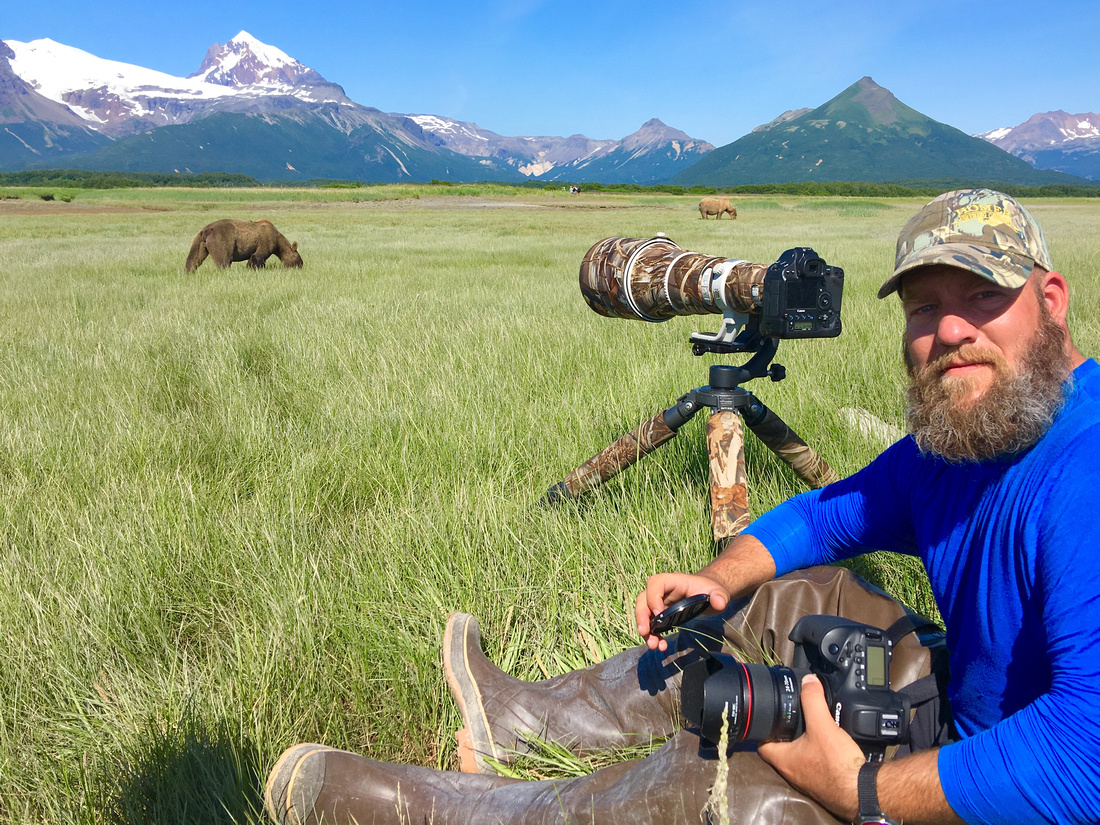 I definitely approach my adventures in a very disciplined and systematic manner. I eat clean, stretch, don't drink alcohol (maybe 1 beer at some point). I want to cram as much as I can into every trip and I want to bring as much back for my family and friends as I can so I can expand their horizons as well as fostering their sense of adventure to make them stewards of the world as I strive to be. I don't have a platform. I don't think I need to. I believe if we all get out and see the world, the beauty, the fragility, the compassion, we have no choice but to realize how important it all is. How important we all are individually in maintaining this great blue sphere we all dance on. 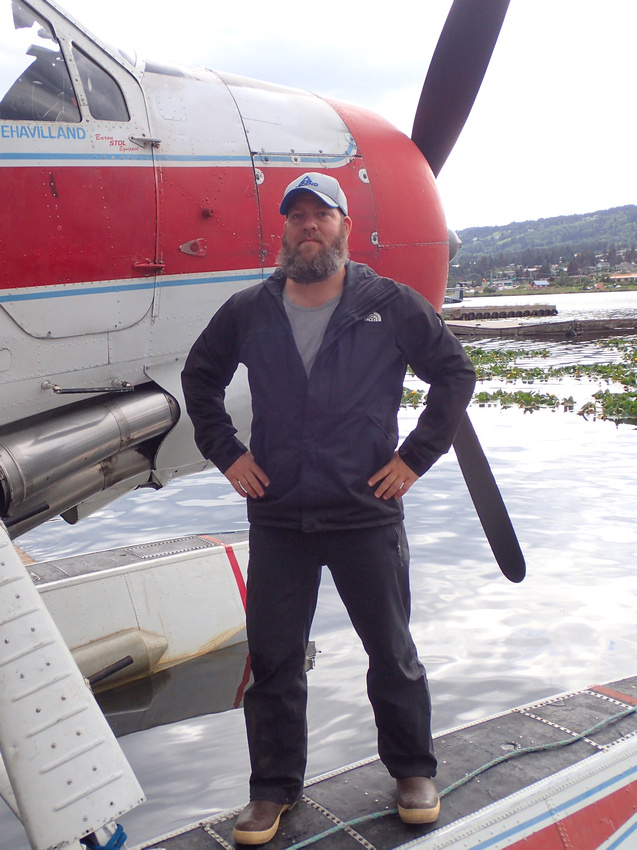 Click here to view the full gallery. Please leave a comment on you favorite shots so I know what to print and frame. 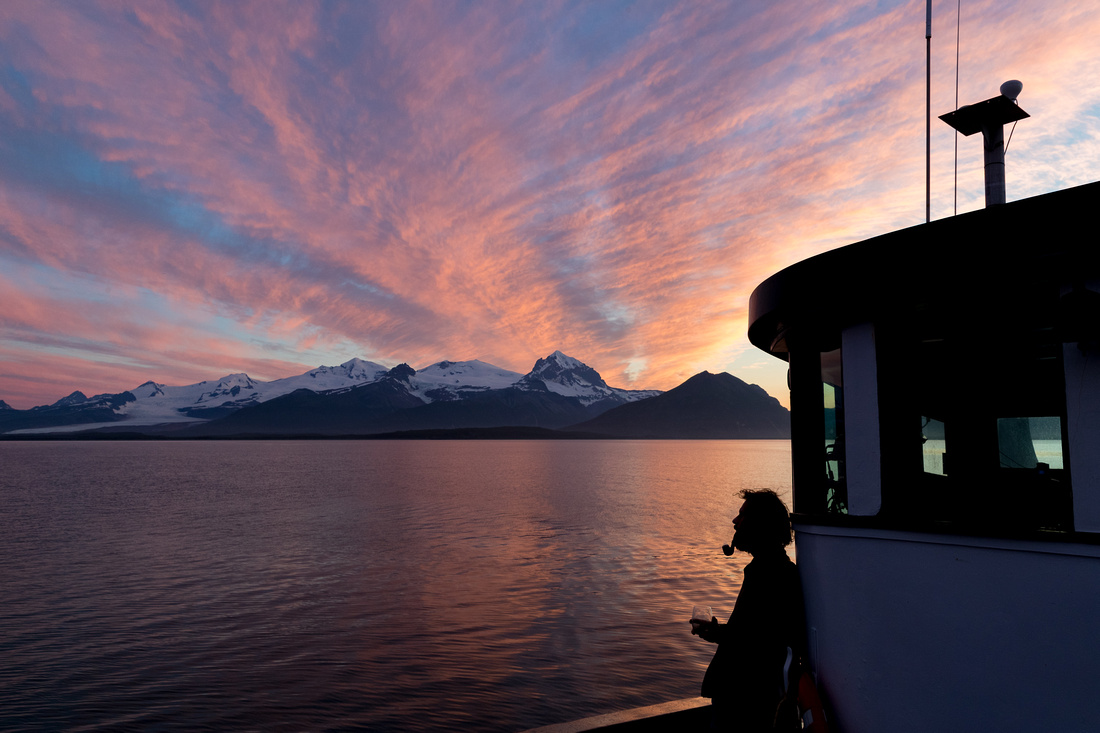 Midnight in KatmaiErik Smoking his pipe and sipping on some Jameson

Thank you for the kind words. I still have my Fathers old Canon on display in my living room.
brianne fitzgerald(non-registered)
amazing, such peace noted in the snaps. i love the eagle looking right w the ruffled feathers and the last one; sunset very much. I remember your dad and i think that he would be so very proud of this body of work. thanks for sharing!
No comments posted.
Loading...
Subscribe
RSS
Recent Posts
The Bears of Katmai The Eagles of Kachemak Bay, Alaska The Phantom of the North More Snowies! Quebec and Ontario Canada Snowy Owls, Cape Cod January 2014 Thailand Trip
Keywords
Owl Alaska Nature Birds Snowy Owls Bears Coastal Brown Bear Eagle Grizzlies Grizzly
Archive
January February March April May June July August September October November December
© Michael J Lang
Powered by ZENFOLIO User Agreement
Cancel
Continue